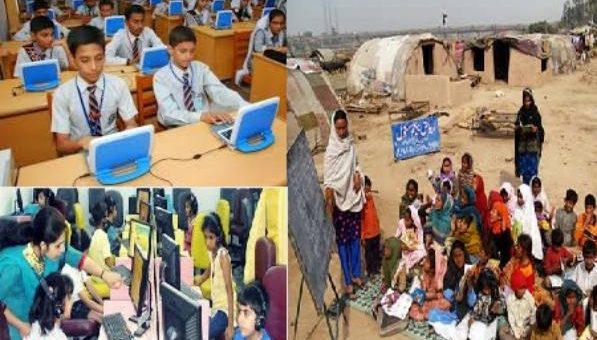 Pakistan’s Education System Is In Shambles And Corruption Is To Be Blamed For It!

Corruption is a familiar phenomenon for people in developing countries, ruled by corrupt politicians motivated only by greed and self-interest. Pakistan is one of those countries. However, the Education sector seems to be the worst affected from corrupt practices. In Pakistan, one fails to find a single department or institution that is free from the plague of corruption.

The quality of education in Pakistan has been declining for some time now, and it appears that all of the factors responsible for its loathsome condition stem from corruption! Our literacy rate has gone down from 60% to 58%, while the number of children out of school in Pakistan is second only to Nigeria.

If we intend at solving this problem, we need to identify the black sheep in our education system who are to be blamed for it.

Here are some of the chief causes of corruption in Education in Pakistan:

1- Political Appointments:
Even though, teachers are being increasingly hired through the National testing service, the political appointments are rampant. Many a times, the chancellors of higher education institutes are still given top positions in lieu of their affiliation or ties with the ruling party.

2- Ghost schools/teachers:
Ghost schools refer to such schools that exist but only on paper. Such schools have no actual presence, no teachers and no students and yet keep receiving the funding. This funding goes in the pockets of the higher officials of the education department who run such scams in collaboration with political accomplices. This phenomenon is quite prevalent in Pakistan. The same goes with the ghost teachers. According to reports, in Baluchistan alone there are 10,000 ghost teachers who receive their salaries on monthly basis, but do not go to the schools to teach. On the other hand, at least 52 ghost schools have been uncovered in Sindh.

3- Low Budget Allocation:
The budget allocation in Pakistan has always been incredibly low as compared to the allocation of other sectors such as defense or health. Pakistan spends way less on education than the other countries of the world. As a percent of GDP, Pakistan’s allocation for education was just over 2.5% for the year 2018-19.
Due to this low budget, the government has to rely on foreign aid or grants to support educational programs, which creates much room for embezzlements. For instance, USAID and UN programs have pumped billions of dollars in Pakistan to support education initiatives but Pakistan has little to show for it, since most of the money received gets wasted through corruption.

4- Lack of Government interest:
Government hardly ever shows commitment towards fighting corruption in education. There seems to be a lack of political will on the government’s part.

5- Obsolete examination system:
The system by which examinations are conducted at the primary and secondary level is such that, it paves way for corruption. Many a times, papers get leaked online, while other times invigilators are caught receiving bribes from students in exchange for letting them cheat. A robust, efficient and modernized examination system is needed to solve this problem.

6- Lack of technological advancement:
The governmental education boards still seem to be stuck in the 80s and haven’t yet been computerized. Students have to wait for hours outside the board offices to get their metric/inter certificates or other important documents. This highly inept system, creates room for bribery instead of eliminating it.

7- Low salaries of teachers:
Despite gradual increase in education budget over the years, the government has kept the salaries of teachers very low. On top of that, many a times they are not paid on time, months in a row forcing them to come out on streets protesting to get their salaries. As a result, many government teachers resort to illicit activities such as revealing the paper to students ahead of the examinations, which accounts for corruption.
Moreover, this lack of interest on teacher’s part results in the student’s lacking in necessary skills and have to resort to Essay Writer Services to get their assignments done.

8- Mega schemes:
Many of the government initiatives for education have been introduced merely as a means to gain popularity and increase vote bank rather than the improvement education itself. Therefore, many schemes like laptop and Danish schools turned out to be scams where corruption of billions was carried out. Unless government starts introducing robust and realistic measures to increase literacy rate, the situation wouldn’t improve and such gimmicks could only be the cause of more corruption in education.

Unless, the government becomes serious in tackling the root causes of corruption and coming at them with full force, the problem will persist and with time corruption will only increase, resulting in a further decline in the quality of education as well as literacy rate in Pakistan.